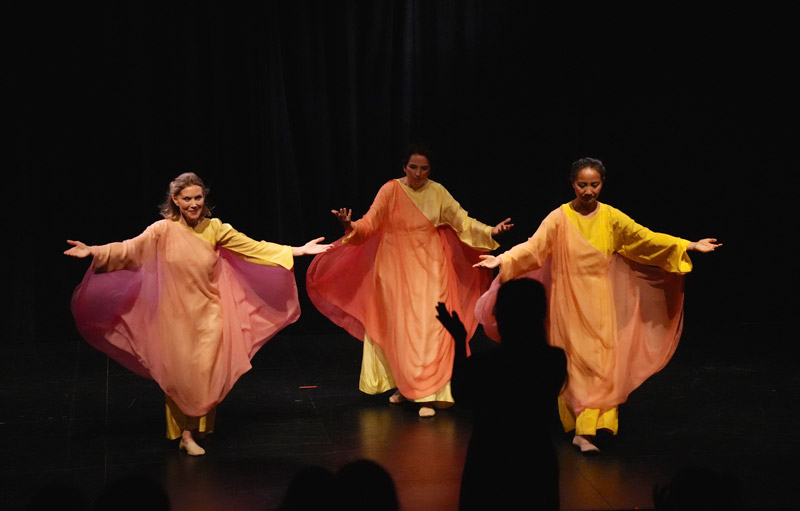 You may have read earlier on this blog about an upcoming Eurythmy performance June 17th at a theatre in downtown Toronto.

That performance was the culmination of what must have been weeks and months of preparation on the part of the eurythmists, as well as with the musician and the speech artist who accompanied the performance.

The final result felt like a labour of love, a love of eurythmy, a love of music and a love of the word. And it was great to see a serious eurythmy performance on a real professional stage with actual stage lighting for a change, after being accustomed to seeing eurythmy performed in more improvised venues for so long.

A version of the same performance was presented a few weeks later in Barrie, only with a different speech artist and in a simpler setting.

We asked Lois Macaulay who was one of the performing eurythmists as well as an organizer of the event to share a few reflections on the evening to be included in this blog post. Her contribution below highlights some of the impressions which she received from various people who had attended the performance. Lois writes:

This was the first performance of eurythmy in Toronto in decades.  A large portion of the audience had never seen a eurythmy performance before.  Here are some of the impressions:

“It was so serious. No one was smiling.”

“Tonight, I saw something really beautiful.”

“The eurythmy didn’t move me, not like the Baroque concert at the Christian Comunity Church.  All I could think of as I watched was “Mirror, mirror on the wall.”

“I missed the introduction so I didn’t know what I was supposed to be looking at. I’m not a dance person. But Kim Kendrick was terrific. Her voice was perfect to host the performance. She spoke the poems beautifully and her singing was a pure bonus.”

“Your event last night was so beautiful, your performance was gorgeous … so ethereal, so moving. I really loved the music and the song that the narrator sang was so potent…what a beautiful voice she has. Thank you for putting it all together…I really enjoyed it and appreciate all your efforts.”

“The first half should be demonstration and the second half dance.”

“The music was beautiful but the poetry, with the sounds and the gestures, that was something really special.”

“A glorious evening of movement repertoire choreographed and performed by Lois Macaulay and her ensemble.  The rhythms and tones of music composed into free artistic expression.  A memorable evening.”

One thing I have to mention, the LED lights were difficult.  It felt as if the lights were eating up the etheric substance.  We had to really push the movement out.  I much prefer the old coloured gels over incandescent flood lights, but those days are probably over. Still it was wonderful to have a talented group of artists on a fully illuminated stage.

A warm heartfelt thank you to everyone who attended.

Thanks to everyone who played a part in bringing about this first eurythmy performance in Toronto in a long time. It was a memorable experience.

Although there is no relation between the performance in Toronto and the upcoming part-time eurythmy training that is starting in November 2022 at the RSCC in cooperation with Auriel Eurythmy, other than that they are both about eurythmy, it seems only appropriate to mention it here, since if you were interested enough in eurythmy to have read this far, you might also be interested to know about this upcoming part-time training. As mentioned above, this new part-time eurythmy training which is being offered this year for the first time ever is a collaboration between Auriel Eurythmy and RSCC.

The first four sessions will be Nov 8-14 2022, Jan 26-Feb 3 2023, April 6-20 2023 and June 5-16 2023. The big deal about this training is that for the first time ever it will be possible to complete a full eurythmy training right here in Canada over the course of five years. Of course a lot depends on whether there is enough enrollment for the program to go ahead. So please spread the word to anyone you think might be interested. For full details see: rscc.ca/eurythmy-training/