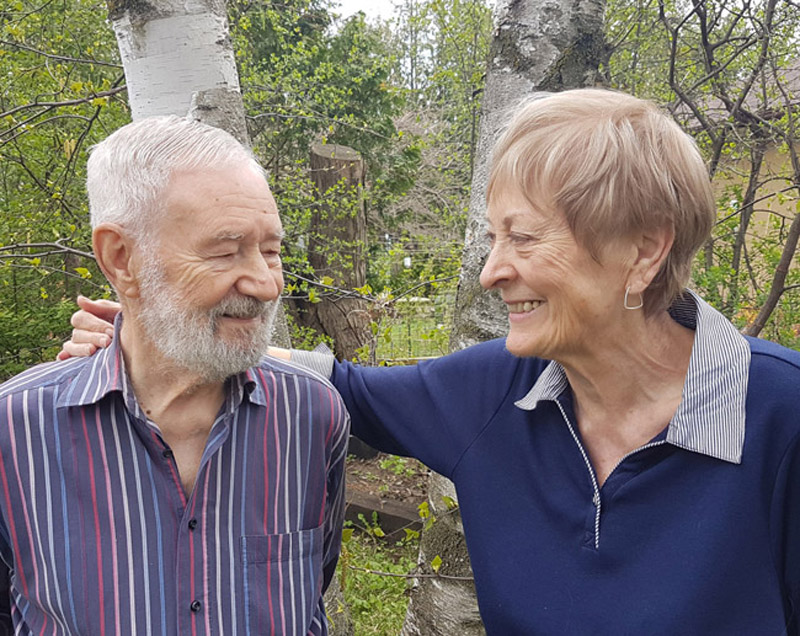 Futurist and journalist John Kettle, 91, died on May 15, 2020 in Toronto. Born in London, England, on July 22, 1928, John emigrated to Canada with his wife Pat in 1953 after serving in the British military in the years following World War II.

Once in Canada, John explored the philosophies of Rudolf Steiner and became one of the founders of the Toronto Waldorf School and the anthroposophical movement in our country. Of his early involvement, John said he felt like a man who planted an acorn and then followed other pursuits for half a century.

And what a busy half century it was! Early on, he wrote for, and edited magazines such as Canadian Architect and Canada Month. In 1975, he married Helen Hardman, and became a father figure to children Hilary, Brett, and David. During that time, he authored many books, including The Big Generation and contributed many column inches to The Globe and Mail. He also had a long career as a prominent futurist. From 1982 to 1995, he published FutureLetter, a newsletter dedicated to helping organizations anticipate change. He gave talks worldwide and consulted with governments and companies providing forecasts on just about everything.

In 2005, then widower John reconnected with Diana Hughes, whom he had invited to become one of the first teachers for the Toronto Waldorf School in 1968. They married in 2007 and with that he renewed his connection to anthroposophy and Waldorf education.

When he wasn’t researching, writing, or forecasting, John loved to travel, draw, and paint. He watched baseball and tennis avidly, and was an exacting and prolific writer of letters to the editor.

John is survived by his wife Diana, sister Anne, children Brett and David, Diana’s children Fiona, Siobhan, and Rowan, and John and Diana’s grandchildren. He will be deeply missed. A small funeral for immediate family was held on Monday.

Profound gratitude is owed to Dr. Khemlin and the team at the Reactivation Care Centre for their kindness and devotion to John’s care.

Eulogy given by Rev. Jonah Evans at John’s funeral

at the Church of the Christian Community on May 15, 2020, with some editing by Diana for accuracy

John was born July 22nd, 1928 in Wanstead, Essex. His mother’s name was Ruth. His father Frank was a stockbroker. He had one dear sister, Anne. He grew up in London in the 30s. At a certain point, his father could afford to send him to a very fine boarding school, Felsted School, in Essex. He loved school and it was an excellent classical education where he excelled in English, math, Latin and rugby. Even though John never went to university, many who knew him would describe John as one of the most educated and informed human beings that they knew.

He graduated from Felsted in 1946. He then served in the British military from 1947 to 1949. He worked in counter-intelligence while stationed in Northern Germany. John loved this work. He seemed to love everything he put his mind to. This was one of the qualities that was admired in him: an unending interest in the world, in possibilities, in the future.

So, while working as a 007-Bond-like spy, he met a lovely lady, Patricia Anderson. They quickly became a pair and were married later in 1950 in Chelsea, London. Pat played a big influence in his life.  She is the one who introduced John to anthroposophy and Waldorf education, both of which became fundamental to John’s spiritual and intellectual life.

They emigrated together in 1953, departing Southhampton on October 30th, arriving in New York aboard the ship Liberte, with the stated destination of Canada.

Early on in their new Canadian home, John got a job in journalism. He worked hard and quickly rose in the ranks. Already in 1955 he founded The Canadian Architect journal and in 1961 helped found Canada Month magazine. As a forecaster and trends analyst he was consultant to many corporations, such as AT&T, IBM, the Royal Bank, as well as government departments and agencies, including the House of Commons, the Prime Minister’s Office and the United Nations. After deciding to work for himself as a freelance writer in 1966, John would later become Canada’s first consulting futurist. He wrote a series of articles about the future, and many books including his most famous, The Big Generation. Its success led to much public speaking and consulting, often 50 talks a year, all over Canada, the US, Algeria, and Japan. His close friendship and productive partnership with Marc Zwelling led to the start of a highly regarded magazine called FutureLetter.

If you look on Wikipedia, a futurist is defined as “people whose specialty or interest is futurology or the attempt to systematically explore predictions and possibilities about the future and how they can emerge from the present.” The future was John’s vocational passion. He was fueled and inspired by the possibility of the new – creating the new. He loved to ponder how change occurs, and spent much of his spiritual capacities with the mystery and nature of time itself. He loved language and grammar and wrote memorable columns and articles defending the proper use of words like “relativity”, and especially defending the correct use of hyphens. (You don’t know how intimidating it is to write a eulogy for someone like that!)

His personality and character were perfect for a futurist. For a good futurist must be highly organized but flexible to adapt to unpredictable changes. He loved routine and order, numbers and categories. Siobhan, one of his  step-children, remembers borrowing his car and being asked to track her fuel usage. He loved statistics which are used for crafting predictions. He loved to read and catalogue what he read. He has a notebook where he wrote down the authors of all the books that he read – over 14,000! He had an accountant mentality and at the same time was very flexible and in the moment. This combination of form and freedom that John embodied is seldom seen in an individual human soul. He loved to work and was extremely disciplined. When he set his mind on something, he did it. But at the same time he loved to celebrate with friends; he occasionally loved to let loose and enjoy wine! Tim Horton donuts and ice cream were also never far from his reach.

Essentially John’s joy was in being part of and creating the new. In 1967, after five years of preparing a detailed plan to start a new Waldorf school in Toronto, John and Pat went to England to recruit teachers. At a presentation at Michael Hall School in Forest Row, John met and persuaded Diana Lawrence to return to her native Canada to become the first grade one teacher of the Toronto Waldorf School. Little did they know then the nature of their future destiny together.

John was a founder of the Toronto Waldorf School. He identified the first piece of land for the school and pioneered its public advertising. In Newtonbrook Plaza near Finch and Yonge, the WSAO rented a storefront in which they set up a model of a Waldorf classroom.  John wrote an introductory pamphlet to Waldorf education that is still relevant. Like any good futurist he called the pamphlet Waldorf: Education for Tomorrow.

In 1969, John met Helen Hardman. She was wearing a golden dress which he couldn’t get out of his mind. Falling in love with Helen was a further push for the difficult end of his marriage to Pat.

John was with Helen for 30 years before she died of lung cancer in 2004. He loved Helen very much but their relationship was not easy. These thirty years were both beautiful and challenging years. Helen was a strong support to his career as research assistant and advisor. Helen had three young children, Hilary, Brett and David, for whom John became a stable and loving presence in their lives.

Around the year 2000, John had picked up several remaindered copies of Art and Human Consciousness at the National Gallery in Ottawa. He called Diana to see if she and/or the Steiner Centre would like a copy.  Four years later she stopped by in Oshawa to pick up the book and to enjoy a lunch with Helen and John.  Sometime after Helen’s unexpected death, Diana invited John to come and experience how the acorn he had helped to plant in the sixties had grown into a remarkable oak tree: the Toronto Waldorf School.

Through this meeting with Diana John was reintroduced to a community that he loved.  Eventually they started a group studying with particular fervor Steiner’s Philosophy of Freedom and Owen Barfield’s Saving the Appearances. It is not surprising to me that John was so interested in Steiner. For like John, Steiner too was a futurist. Steiner predicted the world wide web, the profound future need for an education that cultivated true human qualities in the midst of an ever increasingly technological world. Steiner saw with clarity that human beings of the future would need to struggle to keep connected to what makes us human, to culture, language and morality. Steiner saw the human being of the future as having to struggle to cultivate the authentic light of the human heart in the midst of a de-humanizing culture. This view of the future, John shared.

Having asked Diana’s daughter Siobhan if he could marry her mother, he proposed to Diana on Christmas morning in 2006.

The years with Diana were, for John, the golden years of his life. He so much enjoyed their honeymoon in Switzerland and the south of France, painting in Italy, bounding around in Roman colosseums, and some years later walking on Hadrian’s wall in Scotland. Partnership with Diana seemed to combine John’s love for family, community, spirituality, culture and intelligence.

John was highly intelligent but also humble, never arrogant. He was interested in all things, especially things that motivated large groups of people even if it meant having to watch teenage movies like Texas Chainsaw Massacre. He was hardly ever angry, only calm and collected. He could make almost anything interesting. For him, boring was not on. Conversation needed to be pointed and constructive, chit chat was not for him. He was seriously funny, a dry-wit, not slapstick but humour that was sharp and perceptive. At times he could be a rascal but always embodied a true gentleman. He was self-deprecating but confident. He could learn and solve the problems that arose. John was his own man. Original. Independent. But his independence was limited. He couldn’t cook worth a darn.

John loved through interest. He wasn’t sentimental but his care for others was expressed in the currency of presence and attention.

At the end of his life, as he suffered from dementia and Covid 19, the doctor and nurses expressed their admiration for John. “He was like a British count” they said. “Always a gentleman. Infectious dignity. A nobility that inspired us all. Our favorite patient.” The nurse told us that at his last meal, instead of yoghurt, they spoiled him with two portions of ice cream.

The John who wrote the Book of Revelation, the ultimate futurist, revealed that the essence of the human being is both priestly and kingly.

Our John followed in these footsteps. For he inspired in us a feeling of the dignity and nobility of the creative human being, just like the great Apocalyptist. He was deeply concerned for our human future. He strove to find, understand, and behold how the school of human evolution would continue.

May his gift, this spirit of human dignity, shape us and kindle in us its flame – that it live on in our hearts.

Blessings on your journey, dear John.

Note: This story was originally posted in May of 2020. We are republishing it again due to popular demand.