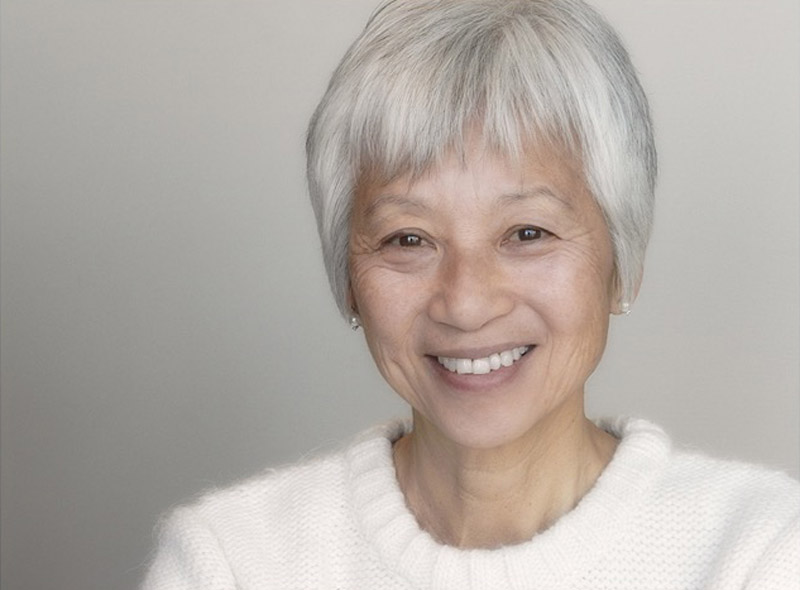 Kathie Young offered a popular course on Creative Felting at the RSCT’s Summer Festival in July 2019, while her husband Larry Young taught a course on painting faces as part of the same RSCT Summer Festival. Two years later, Kathie passed away on Sept. 21st, 2021. In her memory we are publishing here first an adaptation of her eulogy by the Rev. Kate Kennedy, followed by a brief biography of Kathie’s life written by her daughter Mihae. The first and last photos are from Larry Young and the others are from the 2019 RSCT Summer Festival.

Kathie Young was born Hisung Chun in Seoul, South Korea on October 22, 1949. Her mother, who worked to cultivate the natural gifts of her children, hired an art instructor for her daughter already at a young age. This provided great fun in her childhood and gave her the experience of being special. In 1960, at the age of 11, the family emigrated to Canada, and she received the name Kathleen, or Kathie for short. Her younger brother was renamed David, and her younger sister was renamed Jennifer.

During her teen years, a growing desire for independence and freedom grew in Kathie. She fixed her gaze on New York City, and longed to study design there. Her father, reluctant to let his young daughter go, but he made a deal with her. If she could gain entrance into the most prestigious design school in all of New York City, Parsons School of Design, then he would consent to let her go. She achieved this, and set off to study fashion illustration. While in New York, she met Allen Mukaida, whom she would later marry.

The couple lived in New York City neighborhood of Hell’s Kitchen, while Kathie began her artistic career. She worked in fashion illustration and layout for Lord &amp; Taylor and later for Andy Warhol’s magazine, Interview. They soon moved out to the suburbs of Metuchen, New Jersey in order to raise their children, Jason and Mihae. They bought a building, the downstairs of which served as Allen’s law office and the upstairs as their home. Kathie and Allen divorced when the children were still young, and Kathie began life as a single mother.

Like with every other challenge in life with which Kathie was faced, she met this one head on and with a great deal of creativity and ingenuity. Converting the downstairs law office into an art gallery, she became an art dealer, helping to furnish New York City offices with original works of art by New York artists.

In 1992, she met Larry Young, another artist, in an Anthroposophical biography group that a mutual friend had arranged. The two fell quickly in love and formed a partnership that would lead to many creative initiatives, initiatives that allowed Kathie to offer her artistic gifts in service of the world. They formed an art school for children and families, put on an exhibit of art by Waldorf students in the historic Gothic cathedral of St. John the Divine in New York City, and created a film together that told the story of a couple struggling to find each other out of true spiritual insight.

Kathie and Larry moved to Canada in their later years, and while their “team” was still strong, Kathie found herself taking on many individual projects during these years: life drawing, acting, teaching handwork and forming an Etsy shop, just to name a few.

Kathie will be remembered as someone who was full of enthusiasm for life and who met those around her with unconditional acceptance and warmth. Her “yes” to art and to life was contagious, and the light she brought into the world will surely be missed. Kathie passed away peacefully at home on September 21st. Her funeral was held at the Christian Community on September 25, attended by close family and friends. — by the Rev. Kate Kennedy (adapted from her eulogy)

In Her Daughter’s Words…

Open, fearless, full of light – these are the words that appear countless times in messages from friends describing Kathie Young. She had the kind of life, that looking back on, you have to sort of marvel at how things came together. Some may call her lucky, but Kathie didn’t believe in luck, she believed in the power of dreaming big, of seeking the truth, and being open to all that life had to offer.

When she told her Korean immigrant parents that she wanted to go to art school in NYC, her father, Choong Lim Chun told her, “only if she got into the best art school there.” She looked up the requirements for Parson’s School of Design, put together a portfolio, and sent in her application. She got a full scholarship and packed her bags for the big apple.

At the age of 42, a gallery owner, art buyer, and single mom with two children, Jason and Mihae, she would walk into a Waldorf school, see the many watercolor paintings pinned to the wall by students and know that’s what she wanted for her kids. It would introduce her to the writings of Rudolf Steiner and ultimately to her second husband, Larry Young. The two, working together would bring about new art and education initiatives that would further establish Waldorf education in NYC, and receive commemorative praise from the Governor of New York.

At 65, a teacher, painter, and etsy entrepreneur, she would find herself an agent and begin doing background work gracing the screen on enough movies, series, sitcoms, and commercials that even her children’s friends would note how often they saw her on tv. She had that kind of palpable light that shimmered in any medium but her brightest spots were in those moments off screen, person to person. She had a way of meeting people with frankness and warmth that both disarmed and opened. It made her a wonderful teacher, mother, wife, sister, aunt, and friend.

Kathie Hi-Sung Young passed away on September 21st, 2021, nine months after being diagnosed with colon cancer. She died surrounded by family, in peace and with love. She faced her death as she lived her life, with openness, without fear, and full of light – a teacher by example till the end. She was a gift to this world and like her name indicates, a ‘precious star’ that shot through this world much too quickly. — Mihae Mukaida